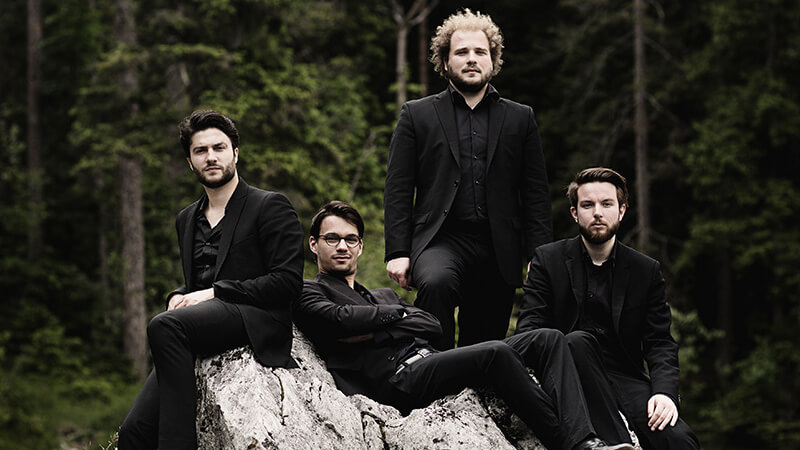 “A highly individual musicality that speaks to the audience.”

Many of the quartet’s concerts have been recorded and broadcast by leading broadcasting companies in Germany such as Bavarian Radio, ARD, Deutschlandradio and einsfestival. Further broadcasts have included SWR, NDR, WDR, RBB, ORF, Radio classique, Radio klassik Stephansdom, Deutschlandradio, ARD alpha and einsfestival. In October 2016 NAXOS released their debut CD with works by Joseph Haydn which garnered great reviews from the BBC, The Strad Magazine, Gramophone Magazine, American Record Guide, Applaus, Süddeutsche Zeitung and many more.

The Goldmund Quartet has been awarded several prizes and scholarships, amongst them the Yehudi Menuhin Live Music Now scholarship. In 2015 they received a scholarship from Deutscher Musikwettbewerb, the Bavarian Young Artist Award and recently the Karl-Klinger-Prize during the 2016 ARD International Music Competition Munich. In the 2018 Wigmore Hall International String Quartet Competition the Goldmund Quartet has been awarded the 2nd Prize a special prize. In July the quartet was awarded 1.Prize and the Prize for the best interpretation of the commissioned piece at the Melbourne International Chamber Music Competition.